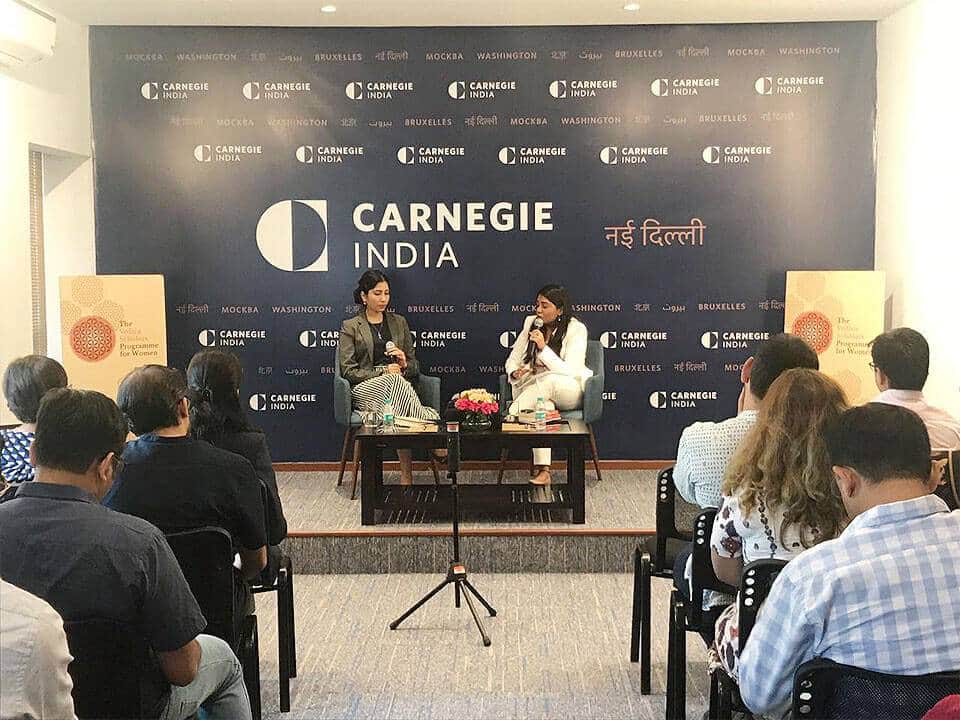 The Anahita Speaker Series, an initiative by Carnegie India and The Vedica Scholars Programme for Women, is a monthly women’s speaker series that aims to highlight the experiences and achievements of women professionals who have made it big in their respective fields. This July, we were delighted to co-host the fourth edition of the Anahita Speaker Series, in which Snigdha Poonam, a national affairs writer with the Hindustan Times and investigative journalist, in her riveting speech, explored the rise of “fake news” in India. The discussion was moderated by Upasana Sharma, a research intern at Carnegie India.

Ms. Poonam began by describing her rise in investigative journalism, focusing especially on the alienation and fear she felt as a woman in a male-dominated, high-risk field. The discussion then shifted to her book Dreamers: How Young Indians are Changing the World, in which she has recorded the experiences and aspirations of the Indian youth in small towns through richly detailed profiles. Ms. Poonam talked about the struggles she and her male interviewees faced because of the intimacy the interviews required, as she was often the only woman in their lives aside from their kin. This initial awkwardness was offset by the release some of them found when talking to Ms. Poonam, a female stranger, about how vulnerable they were to masculinist expectations. Other men were hostile and questioned her “risky” career choices as a woman, capturing a new set of assumptions they held regarding gender roles.

Ms. Poonam went on to speak on how the growing usage of smartphones and mobile internet has revolutionized the news industry. While information is now broadcasted easily, the spread of misinformation through messaging platforms and social media has also become a global phenomenon. This has economic, political, and social consequences. Upon being asked how journalists and news consumers can ensure the predominance of voracious news, Ms. Poonam said it’s important for journalists to use their platform to talk more about fake news and how its spread is scarily well-organized, especially when it comes to mass-forwards on Whatsapp and similar platforms; while consumers have to critically consider the verity of every message they forward. Ms. Poonam described the greater violence in content one can find on regional vernacular-based social media platforms like Hello, as these platforms host communities that are much more intimately connected.

She ended her speech by commenting on India’s future, which looks more male than female. She described how, over the course of her interviews with young men and women, the difference in aspiration between the two genders came out strikingly. While the men aspired towards material and political success, the women wanted rights that were much more basic: the right to education, work, viable public transport, etc. Expressing how heartbreaking it was to witness women who’d given up their aspirations due to family and societal pressures, Ms. Poonam ended her speech by exhorting all women trying to carve out a niche for themselves to keep going, and to meet obstacles with panache. A stimulating Q & A session followed, where Ms. Poonam explored further strategies to mitigate the spread of fake news.