Shagorika on why women should demand more from an MBA. 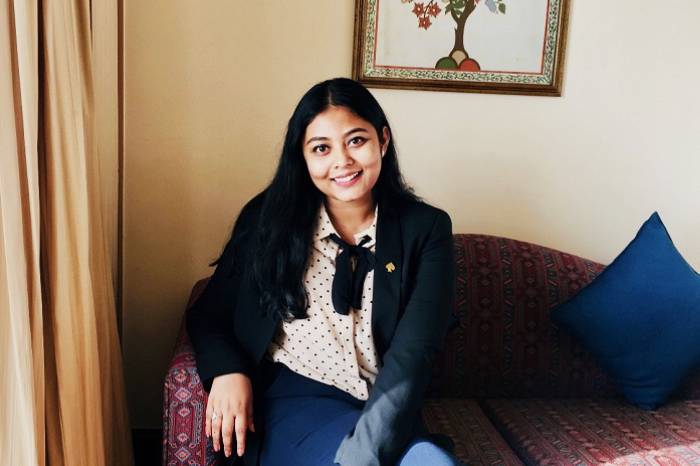 Shagorika on why women should demand more from an MBA.

LSR graduate and Delhi girl Shagorika Das talks a lot about baggage. Kicking off her professional life at 21 and being the youngest on the team at KPMG had its own baggage. She then switched gears to academia with the Vedica Scholars Programme for Women. The transition to campus after a corporate stint meant she was carrying professional baggage. But if there’s one thing she has learned through her journey, it is to drop the baggage quickly and adapt. And as they say, when you drop your baggage, you gear up to take the flight to your dream destination.

In Shagorika’s case it isn’t a job or a step up. She stresses that if she was looking for a new job, she could have done it after KPMG. She didn’t want to invest in a traditional MBA either; otherwise she would have accepted the admission at a prestigious London B School. She wanted to invest in being a better professional, to become a woman leader in today’s world. She reminds us that only 11% of girls in the country opt for postgraduate programmes. We try to understand her reasons for enrolling in Vedica and find out if the decision has paid off.
You seem to have a bent towards Liberal Arts thanks to your Humanities studies at LSR.
Yes. As amazing as my college experience was, it was missing the interdisciplinary aspect. Interestingly, while I was in college, we had the Vedica team come and talk to us about the launch of the programme. I had almost enrolled for it in 2017 when I was working too. But then I chose to continue the job at KPMG.
How was that professional experience for you?
It was a campus placement and I worked with KPMG as an associate management consultant for close to three years. The experience was stringent at times and seamless at others. But it changed something in me because it made me realise that I wanted to study something that I hadn’t studied before. I also think the identity of being in academia then was crucial to me.
What did you miss the most about academia and being a student?
As a professional you get caught up in what is expected of you to say, that you just don’t dwell deep, which you would as a student. I was also missing the peer learning process because my college friends were pursuing their Masters and chalking out their career paths. So, in my personal calendar I am two years late at Vedica, but I am here now.
But when you could have chosen any MBA programme what made you opt for Vedica?
I didn’t want to do a traditional MBA because I wasn’t looking for a step up. If I wanted another job I could have done without Vedica too. I had looked at other MBAs and could have chosen a programme in London. But I was also chasing a promotion at work at the time, and my team didn’t want me to leave either. It has all worked out well, as I said, a bit later, but for the better.
Can you elaborate on what about the programme attracted you?
When the Vedica team was at LSR, I remember it being said that the programme blended management practice with Liberal Arts. I believe it is important to be a better professional in today’s dynamic world. I knew I was making a huge investment in the long-term goal of being a woman leader. Of course, with some help from Vedica since I am on scholarship here. (smiles)
You have been in an all-women’s program at LSR before. Is it an environment you thrive on?
Any cohort that is not intrusive of a gender bias sensitive lens changes your view of the world. It’s not the frivolous girl gang aspect but a lot stronger than that. Vedica stands for women being in the workforce, how we want women to have their voice, how to be a woman leader in the 21st century. It’s the same ideology as my cohort at LSR, it’s only a more diverse group here in terms of age and professional experience.
How is this diversity of the cohort adding to your peer learning experience?
Our cohort is from several backgrounds, some are younger and some older than me. But the course has been designed to suit everyone’s interests. I will give you an example of Urvashi Butalia’s course. I was inspired by her and heard her speak many times before. But in our course, even those who were listening to her for the first time had such interesting perspectives to share.
The very fact that we agree on things that are most crucial, like women’s rights and equality, makes all the difference. We also have the understanding of disagreeing and agreeing at the same time, which is very important and probably a part of being majority individuals. And each one of us has managed to retain our identity and individuality, in classrooms and the hostel.
Being a Delhi girl, did living in a hostel in the same city take some getting used to?
I have always been a Delhi girl and I think the city has a very cosmopolitan culture. But I have seen my cohort from different parts of the country come and absorb the essence of the city so quickly. Often even in hostels you can find students in their own groups. However, here everyone has retained their own sense of being and is accepted for exactly who they are.
Can you tell us about the nature of the programmes and what sets them apart?

Earlier we talked about baggage; one of them for me was my aversion to Economics. So, I had my reservations about core management courses. But here the courses encourage you to look at the business model differently. It’s not about learning Finance but understanding it in business context, which is exactly what you need.
Apply Now
Request Callback
Invite Vedica to your College
Recruiters Connect
eBrochure
Whatsapp